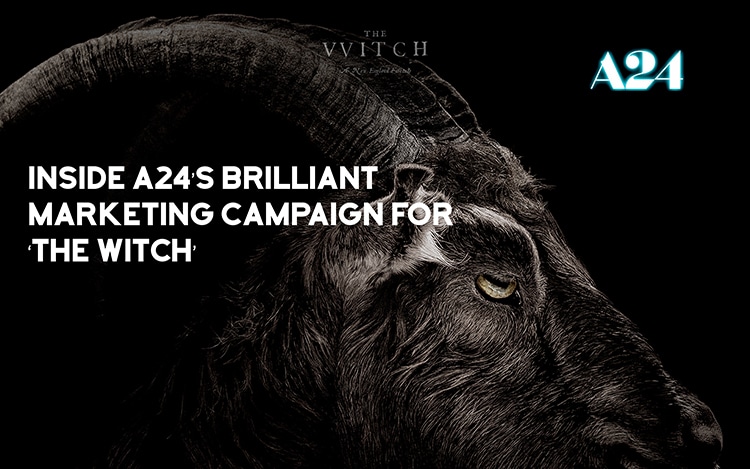 A24’s The Witch took in an estimated worldwide total of $40.4 million USD at the box office. When compared to major Hollywood tentpole films that doesn’t sound like much.

But when you consider…

That’s a wonderful return on investment.

A24 had a 13-month window to roll out the marketing campaign – from the initial purchase of distro rights for The Witch (at Sundance, Jan 2015) to the theatrical debut in Feb, 2016.

“Filmmakers—often the toughest audiences for their own films’ marketing campaigns—recognize the company’s real excitement for their films. That’s the chief message of an A24 campaign, really, from elegant design to sharp social media to clever co-branding choices: This is a company that gets it.” [source]

It takes creative and strategic thinking to outmaneuver the giant blockbuster films put out by Hollywood’s major studios. Good thing A24’s marketing game is on point.

A24 and DirecTV have closed a deal for U.S. rights to Robert Eggers’ ‘The Witch” which sources peg in the low-seven-figures range

The film had its world premiere at the 2015 Sundance Film Festival. Prior to the film’s debut at the festival, A24 Films acquired theatrical distribution rights to the film in the US, with Universal Pictures taking the European distribution.

During the summer of 2015, A24 placed The Witch in a couple of prestigious international film festivals. In July, the film screens at the Karlovy Vary International Film Festival.

Then on to the Melbourne International Film Festival in August. After a brief tour around the world A24 gets ready to put into play their social media marketing machine – ahead of the TIFF.

Watch: Robert Eggers Wanted THE WITCH To Feel 'Like a Nightmare From The Past' @Variety #MIFF2015 tix on sale 10 July http://t.co/NNj0bJcwty

It’s now 6 months out until launch date. A24 starts firing up the individual social media accounts. First up is Twitter. Since going up, it racks up over 10 thousand followers and puts out over 200 tweets.

The Facebook page for The Witch becomes one of the most important social hubs for the movie. As of today it has over 445,000 fans and some of the videos that have been posted have accumulated over 1 million views.

The ‘Black Philip’ Twitter account goes live as well. Hilarity ensues. A24 allowed their campaign one single bit of brevity and this was it. Sheer brilliance. Amongst all of the grim and foreboding images, clips and trailers that dominate the campaign – they create a Twitter account for ‘Black Philip’ the goat and breakout character from the film.

And they have a lot of fun with this account – even going so far as to poke fun at Trump’s presidential campaign. @BlackPhillip also ends up with almost 10 thousand followers.

666 retweets and ill consider it pic.twitter.com/ssRaiXSvXg

The Witch trailer debuts and instantly garners attention for being one of the most memorable horror trailers in quite some time. Word quickly spreads around the web. It amasses over 6 million views by the time the film debuts the following February.

It has now crossed over 12 million plays.

The film is selected to be screened in the Special Presentations section of the 2015 Toronto International Film Festival.

TIFF is one of the largest publicly attended film festivals in the world, with over 480,000 annual attendees. Knowing how much media attention the film could receive at TIFF, it’s no accident that A24 had all of their social media ducks (Twitter, FB, YouTube) lined up in advance.

Not one to leave out the millenials – a Snapchat account goes online.

The posts consist of images, short clips and stylishly rendered quotes from critics maintaining brand consistency with the rest of the social media output.

This February, feast your eyes upon #TheWitchMovie, the film critics are hailing as the best horror movie in a generation. In theaters everywhere 2/19.

The Satanic Temple and A24 partner and the ‘Satanic Revolution’ microsite is launched. This is perhaps their ballsiest and riskiest piece of co-branding.

But if you’re dealing with witchcraft and satanism – how cool is it to get a stamp of approval from the Satanic Temple themselves?

ITS HAPPENING. @TheWitchMovie x The Satanic Temple invite you to join The Satanic Revolution https://t.co/ydQvAriSy9 pic.twitter.com/Dh4fU1RWkA

With less than 3 weeks to go – A24 pushes out a third and final trailer. With anticipation already sky high the trailer ends up netting 4.6 million plays on YouTube.

“The third (and seemingly final) trailer for director Robert Eggers‘ The Witch has arrived and hopefully you’re sold on this immaculate horror film by now. This new preview is tonally in line with the first and second trailers, only hinting at the plot and characters while leaning heavily on the film’s oppressive atmosphere and chilling visuals. And since this movie has atmosphere to spare, why not utilize that and save everything else for when you’re in the theater?” [source]

The Witch opens on 2,046 screens in North America battling it out with the immensely successful Deadpool. Kung Fu Panda 3 and the faith-based Risen (which comes with its own built in audience).

It takes in an impressive $8.8 million that weekend or $4,301 per screen. Not bad at all for a cinematic oddity. 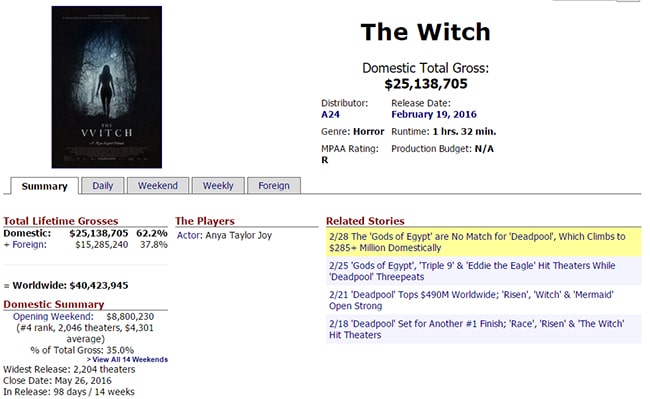 The film plays in theaters globally for a total of 14 weeks ending up with a worldwide gross of $40,423,945. I have no idea how much of that would be profit after marketing costs, distribution fees, and theatrical cuts are accounted for. But I guarantee you at the end of the day there were some smiling faces.

And now it gets to play out on Blu-ray, VOD, cable TV, streaming services and iTunes until the end of time.

The Witch scared the hell out of me. And it's a real movie, tense and thought-provoking as well as visceral. 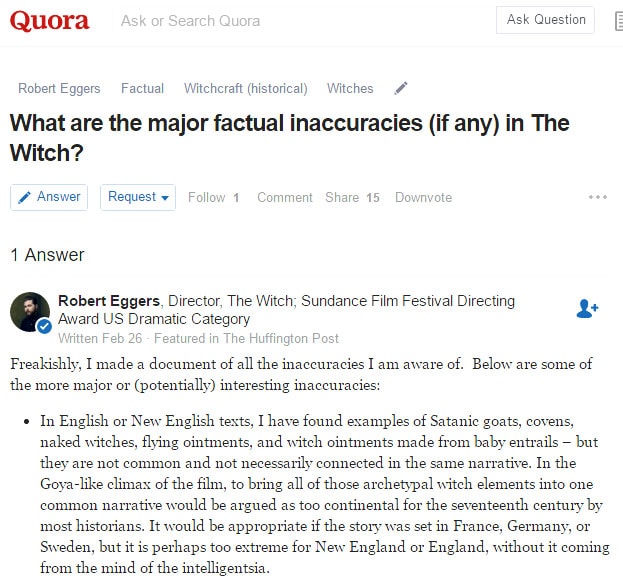 Katherine Howe, bestselling author and Salem witch trial expert answers dozens of questions on Reddit via an AMA the about facts & folklore of The Witch.

Join me at 5pm ET 2/26 on @Reddit to talk @TheWitchMovie, #Salem & the history of witches! https://t.co/vPqhASVcSk pic.twitter.com/DS5yPiGGXI

Exploring the Revolution of A24
How an indie distributor has become a next generation auteur.

The Distributor as Auteur
Can the scrappy company behind Room, Spring Breakers, and The End of the Tour save the film industry?

The Magical Marketing of Moonlight
Director Barry Jenkins and A24 prove that a good story and great marketing make for a solid movie opening.

Pitch Perfect: How Universal’s Digital Marketing Helped It Have The Best Year Ever
Periscoped premieres and meme-inspired Snapchat filters have played a hand in the studio’s record-breaking, gangbusters year at the box office.