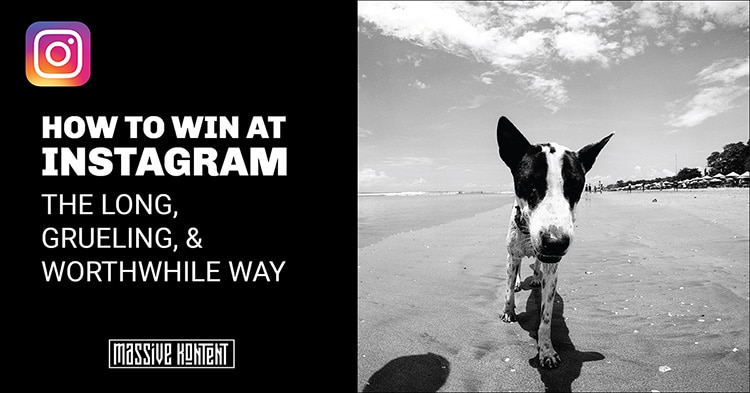 Take a deep breath. There’s a lot of images in this post.

Instagram is my escape portal. It’s both my creative outlet on most days, and a place where I draw inspiration from other photographers and artists.

Consider me all in when it comes to Instagram.

The attention factor on Instagram is crazy! #MarketingFacts pic.twitter.com/kJLWHnONpQ

Right now you’ve got 1080px by 1080px to get your visual point across, or up to 60 seconds in video form and 2200 characters for your initial written caption.

And of course, now there’s Instagram ‘Stories’ adding another dimension.

A GoPro and a Prayer

I started my Instagram adventure back in May of 2015. I had been on the platform since July of 2014 – but didn’t get serious about it until a year later.

I gave myself two projects to do in the summer of ‘15.

Things finally started to take off during a trip to Taipei City, Taiwan in December 2015. I was comfortable with the limitations (fixed lens, no LCD monitor) of the GoPro, and I was taking interesting shots of an interesting city.

And I started rocking those hashtags!

And while in Bali, I landed my first big win. I crouched down on Seminyak Beach and stuck out my GoPro at a pack of wild beach dogs. Score! 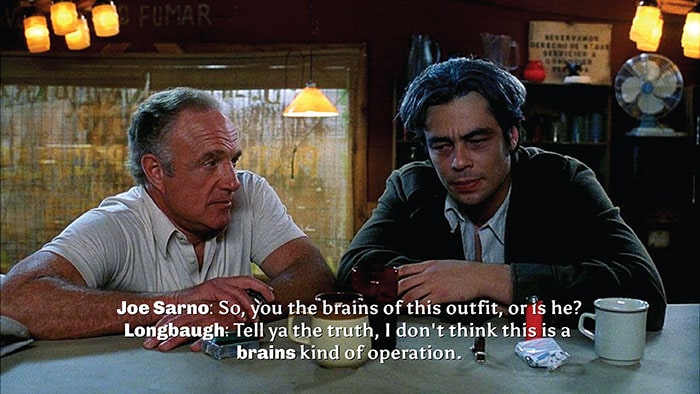 So I had a look at what was trending on the ‘#digitalmarketing‘ hashtag.

Is it just me or is it starting to look a little ‘samey’ out there on the interwebs? 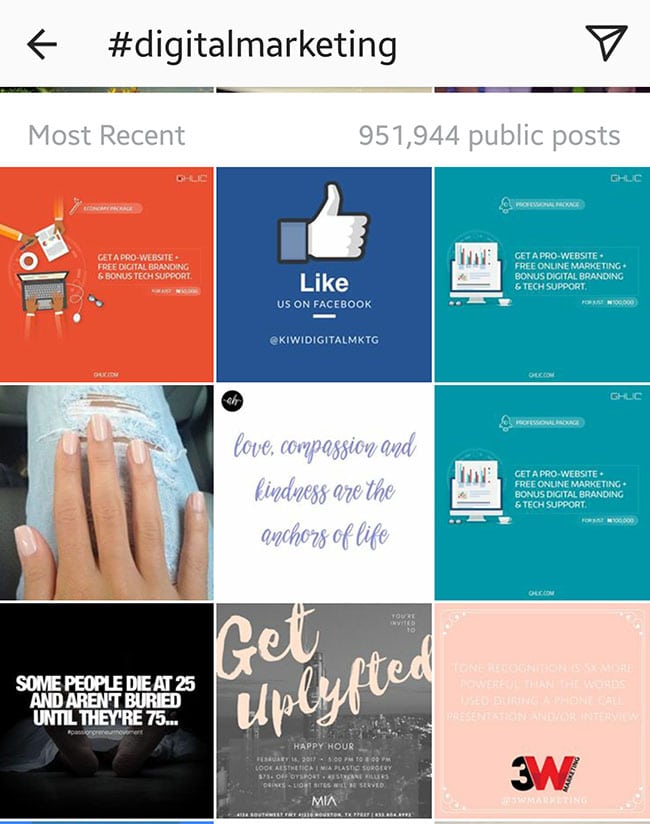 It’s like every other marketer, and social media “guru” went out and got accounts at Unsplash (or Pixabay), Canva while keeping the BrainyQuote tab permanently open on their browser. 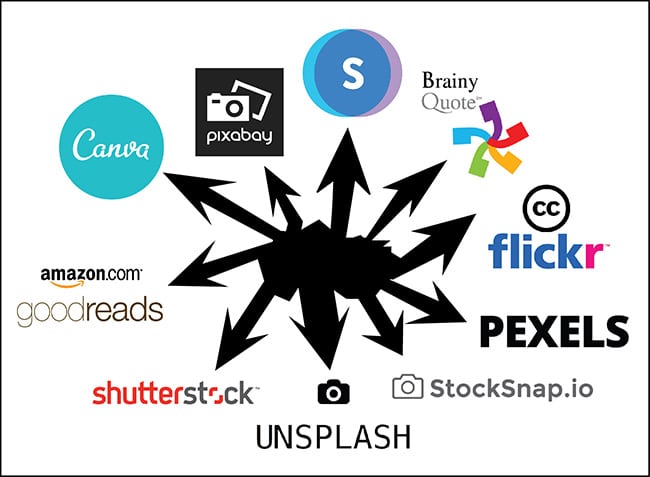 C’mon people. I mean there’s nothing wrong with any of those sites. I actually love Unsplash & Canva, and have used both in the past.

And if you’re a bit more clever and creative you can certainly get away with quote images.

Look at what Deathwish Coffee has been doing… 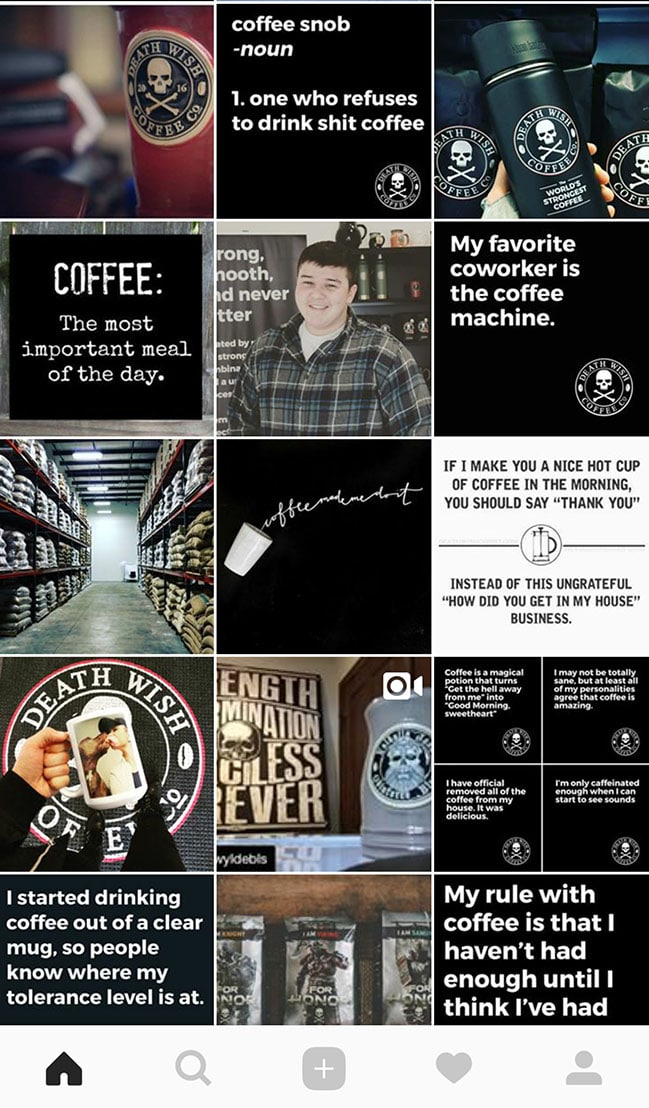 They certainly have a lot of fun with it.

But slapping a Vince Lombardi quote onto a beautiful waterfall or sunset – does not make you a social marketing genius.

There is a better way

You don’t necessarily want to pigeonhole yourself – but you do want to cultivate a style.

I follow a couple of photographers and creators on Instagram – who I instantly recognize when I come across one their pictures in my feed. 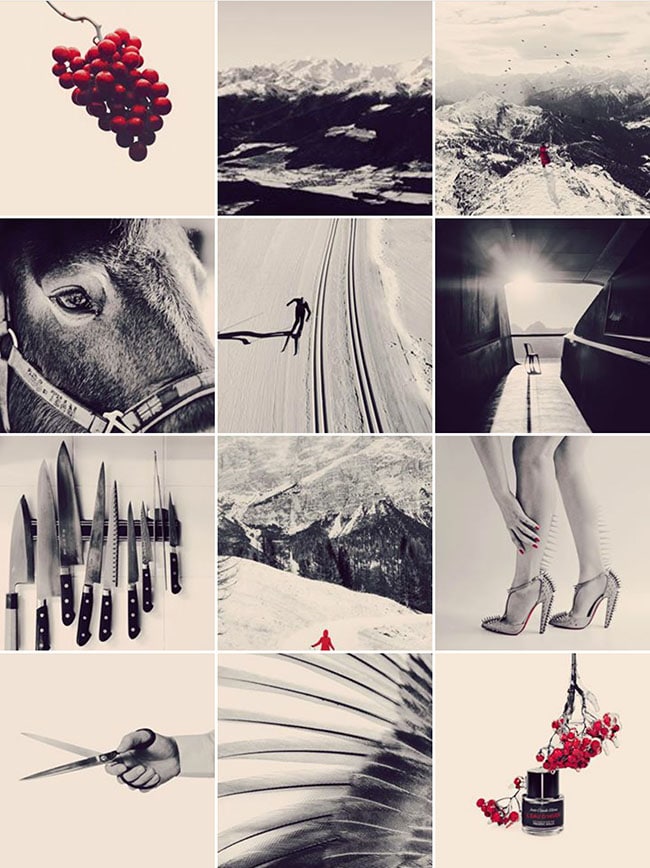 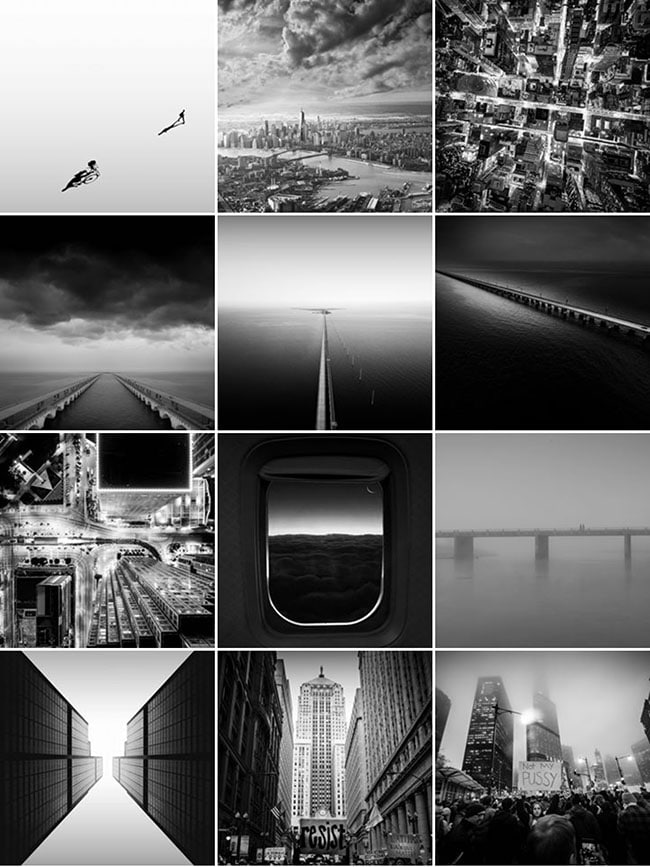 So I worked at it. And worked at it. I’ve been taking black and white photos since 1999. It felt natural to do this in the digital realm.

Throwback Thursdays even give me the opportunity to scan in and post some of my best 35mm black and whites once a week. They mix in rather nicely with the digital pics. 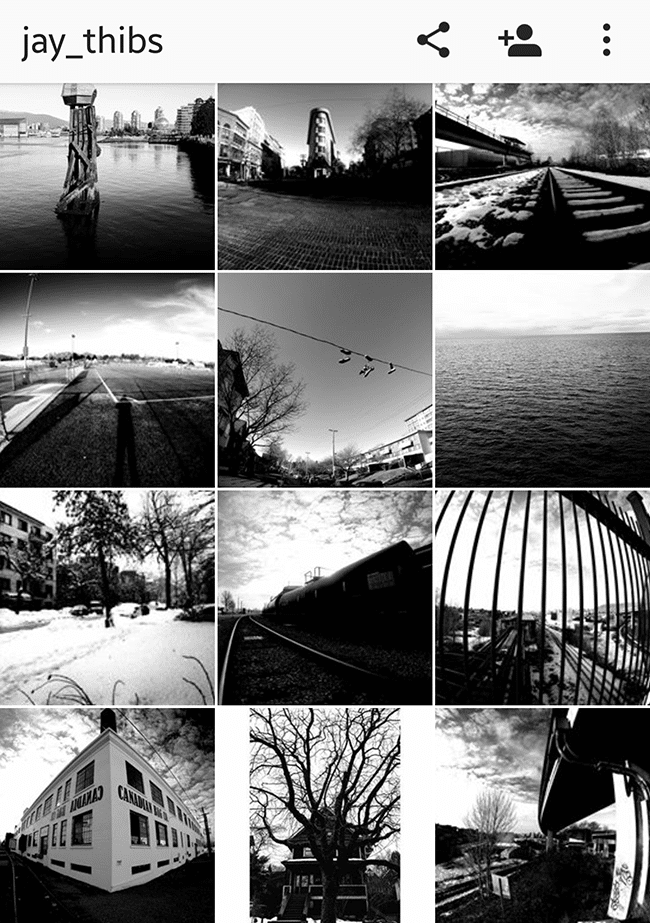 My absolute number one piece of advice to anyone who is struggling to find traction on Instagram.

That’s pretty much it in a nutshell. Maybe this should have just been a 4-word post.

Most of us are walking around with the same technology in our pockets. Smart phones that are capable of 8-12 megapixel photos and 2K HD Video (at a minimum).

You’re all mobile media machines with your Galaxy S6-7’s and iPhones. And you can achieve amazing results with either.

Check out this video done with the Galaxy S7!

Add on a $10 app called Filmic Pro to your smart phone and you’re off to the races.

*Note to Galaxy S4 owners. I feel your pain. I had one of those for two years – and they don’t take very impressive pictures. But wait until you get your hands on an S7!

I encourage you to take some time to learn how to utilize your smart phone cameras more effectively. This graphic below would apply when you’ve placed your phone camera into ‘Pro Mode’. If you can’t be bothered – just keep it in ‘Auto’. 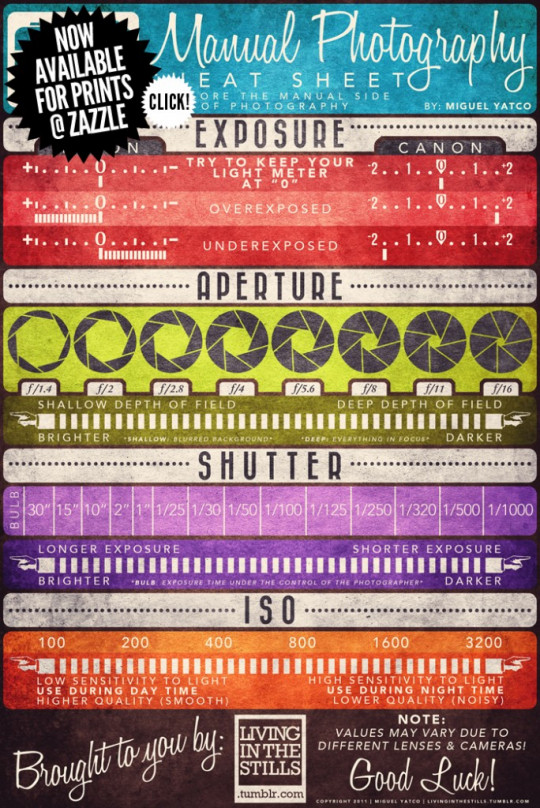 If you want to step up your Instagram game, take better photos and curate an enviable feed, who better to ask for advice than professional photographers acing the game?

How to take better photos with your android phone

With the help of a few tweaks, a few apps and without additional knowledge, here’s how you can get more out of your smartphone’s camera.

I use a lot of them. Separate from the image caption – and placed in a second comment. 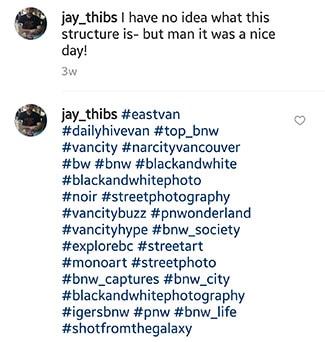 Nobody wants to be the guy who reposts their Instagram photo over to Facebook and have two dozen hashtags travel along with it. While hashtags work fantastically on Instagram – they make you look rather clueless on Facebook.

You’ve got 30 hashtags at your disposal. Use them wisely. 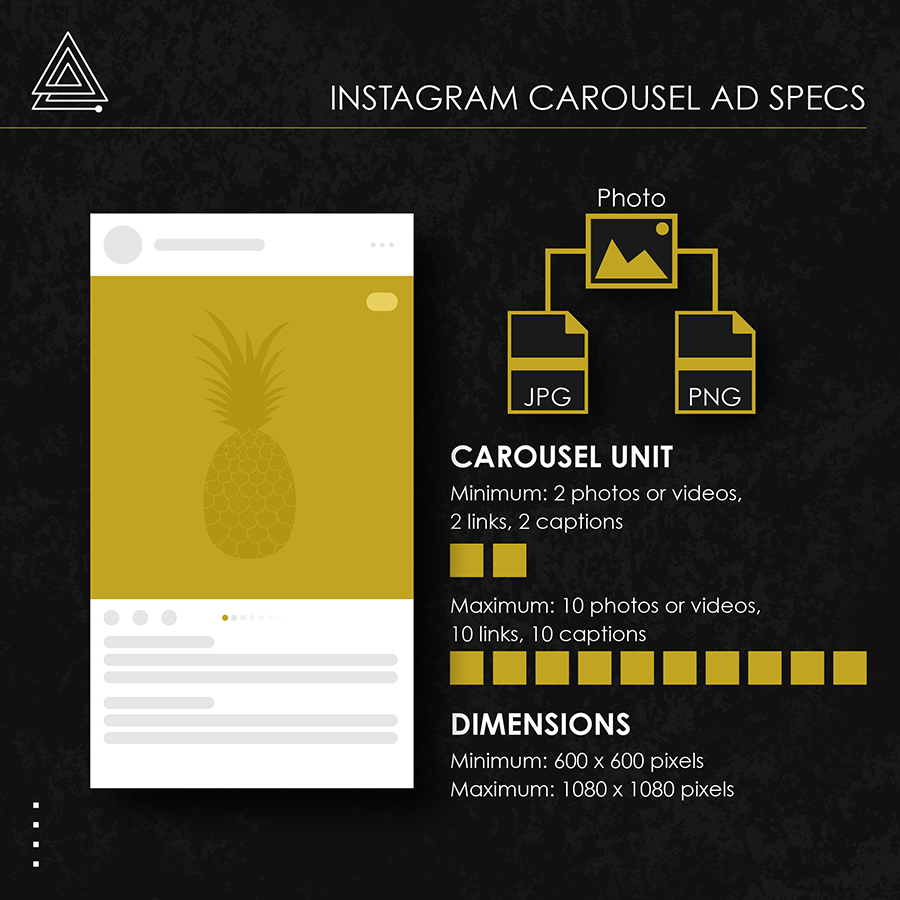 Leveraging Instagram Ads is one of the fastest ways to build your business. The social platform currently has 1 billion users, half of which are on there every single day. Further to that – 82% of the people on Instagram are between the ages of 18 and 49.

It was a looooong road to my first 1000 followers. I refused to play the ‘I’ll follow you until you follow me back game.” I didn’t use any hacks or shortcuts. Just the long game of posting the best photos that I had, and engaging with as many like-minded people as possible.

The second 1000 was a little quicker. And recently I cracked 3000 followers.

And don’t buy followers. Just don’t do it. I know you’ve thought about it. You might even be thinking about it now. 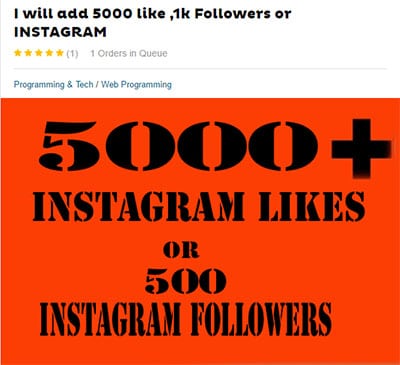 Every time you buy 500 followers on Fiverr, we all cry a collective tear.

“You can like up to 350 photos per hour. This is an incredible number of likes and is not a practical limitation. You would have to like a photo every ten seconds for the full hour to get that many and hit the limit.” [source] 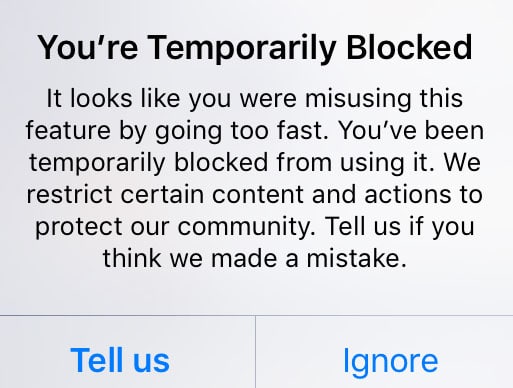 So far on my journey…

But hey – I could be wrong.

If you’re looking to create a lucrative ‘lifestyle blog’ or you need 250,000 followers FAST – so that you can start charging “mad stacks” for sponsored posts – a lot of the above advice won’t apply to you. My 3000 followers will seem absolutely puny for your world-conquering social media ambitions.

You’re going to have to work at a lot faster speeds to accumulate those kinds of numbers, and you’ll probably have to utilize some gray hat strategies and use some automation. And you’ll be married to your phone for 8-12 hours a day.

For the rest of us – let’s go out and create some art.